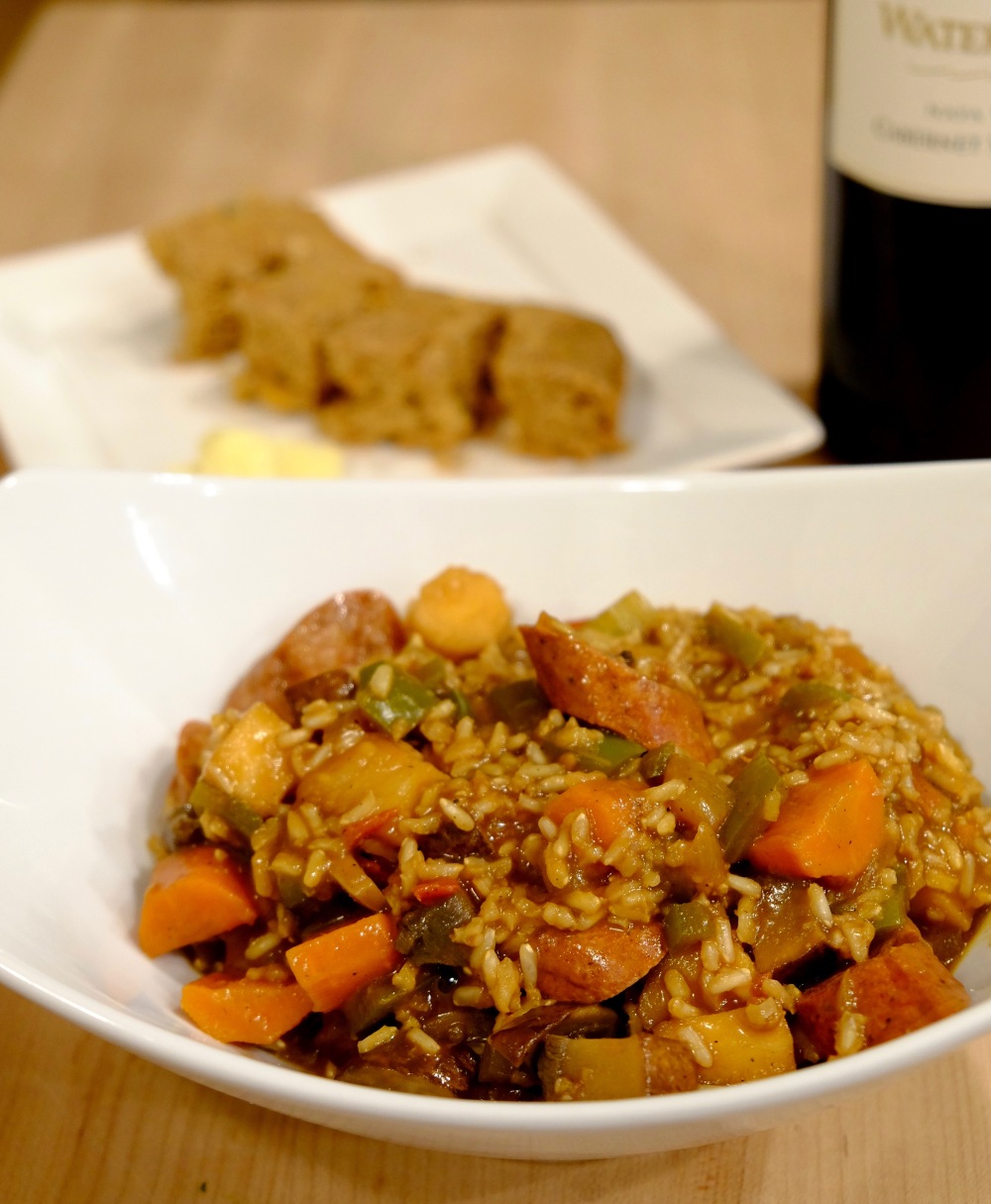 Inspired by an Emeril Lagasse recipe, this jambalaya is a spicy cornucopia of flavors, textures and spices – with only plant-based ingredients. There’s a fair amount of prep, but if you start with the carrots and parsnips, the 30 minutes they’re roasting in the oven is just about right to chop and measure everything else and grill the plant-based sausage.

Brown rice takes longer to cook than white, so if you decide to use white rice instead, you’ll want to reduce the second stage cooking time from 30 minutes to about 15 to 20 minutes. Thoroughly rinse the raw rice in several changes of cold water, then drain well, to avoid the gravy being thickened by rice “dust.”

There are a lot of good vegan sausages on the market now. We like Lightlife Smart Sausages Chorizo in this. 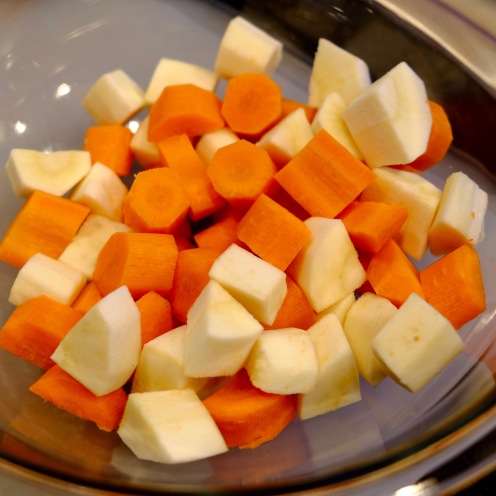 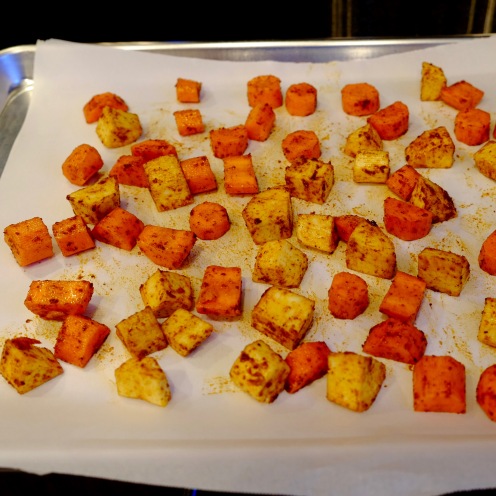 While root vegetables are roasting, prep the remaining ingredients. Grill the sliced vegan sausage for 6-7 minutes (turn halfway through time) over medium high heat (375ºF/190ºC) on an electric grill or in a grill pan; do not overcook. When carrots and parsnips are done, remove them to a small bowl. 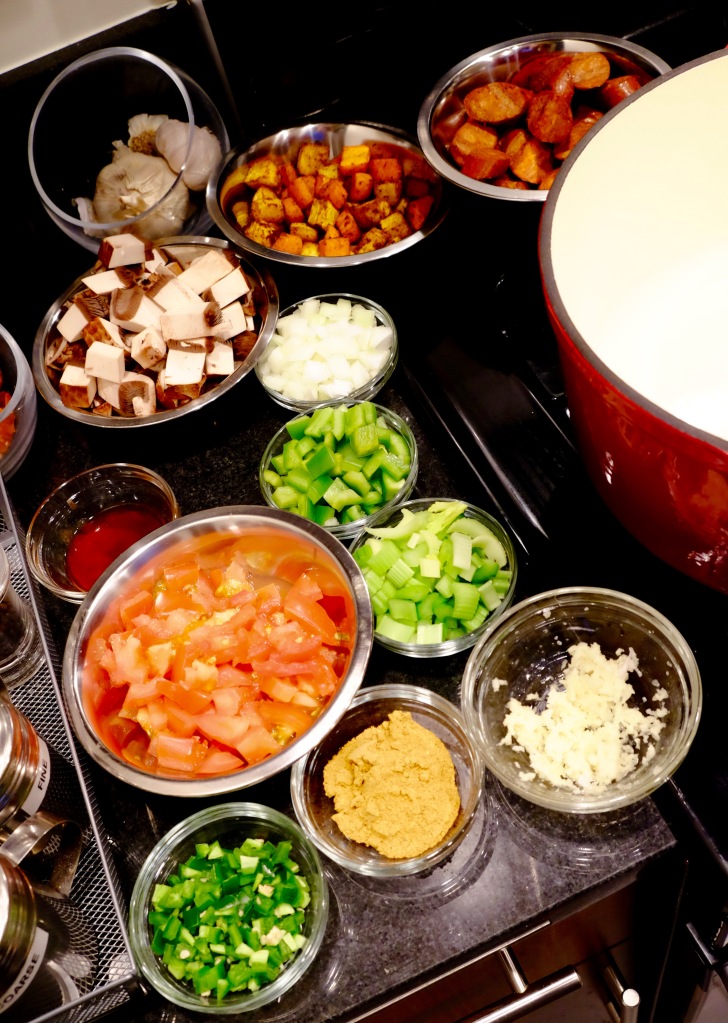 Heat dry a large Dutch oven or heavy bottomed sauce pan over medium and then medium-high heat, until pot is hot, and then add 2 Tbsp. olive oil. When oil begins to smoke, add onion, green pepper and celery and cook, stirring occasionally, for 3 minutes. Add garlic, jalapeño, tomatoes, bay leaves, sherry vinegar and hot sauce. Stir in remaining 2 tsp. of Creole seasoning and cook until tomato liquid is reduced by half – about 5 minutes.

Reduce heat to medium and stir in rice. Slowly add vegetable stock and bring to a boil; reduce to a simmer and add portobello mushrooms. Partially cover pot and cook, stirring occasionally, 30 minutes (for brown rice; 15-20 for white rice), until rice starts to become tender. Then add cooked sausage and root vegetables and simmer, partially covered, for another 20 minutes or until rice is done.

Season to taste with salt, pepper and Creole seasoning. Remove from heat and allow to stand, covered, for 5 minutes before serving. 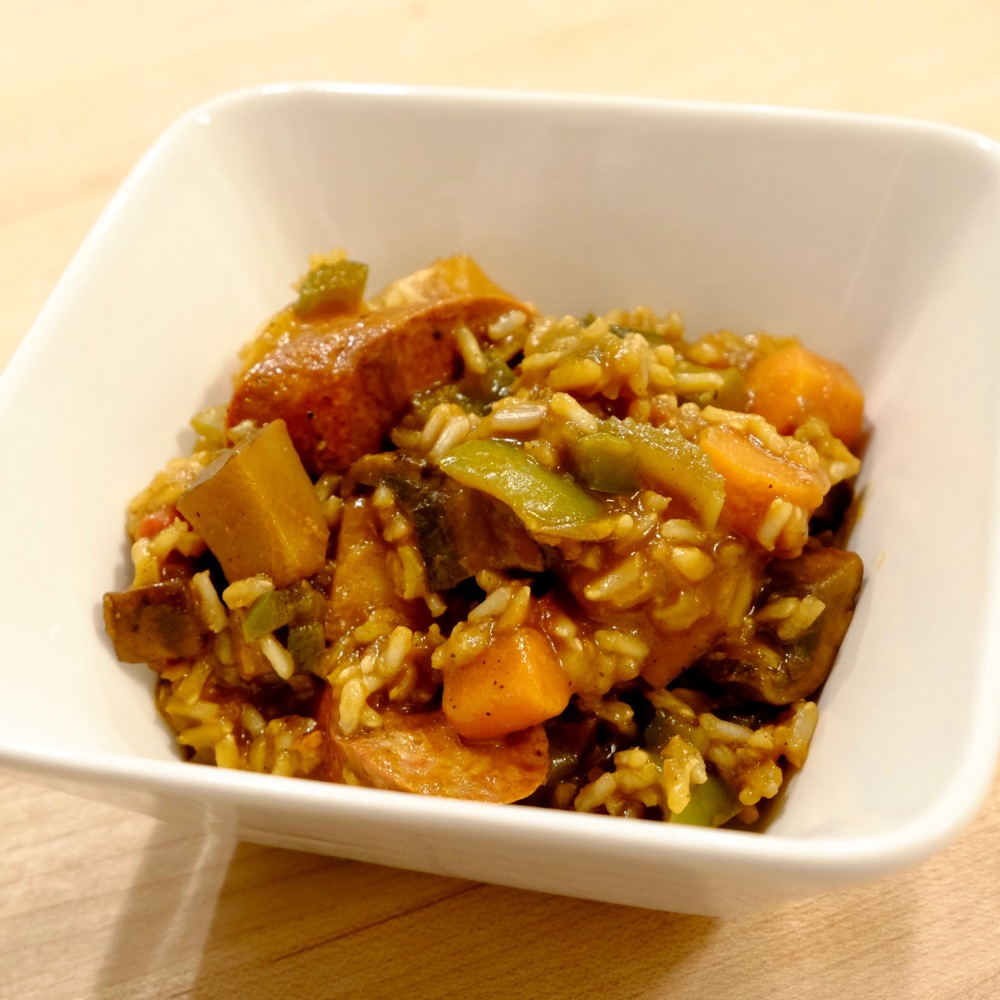 Recipe by the Mad Vegan Chef, inspired by http://www.foodnetwork.com/recipes/emeril-lagasse/cajun-jambalaya-recipe2.html